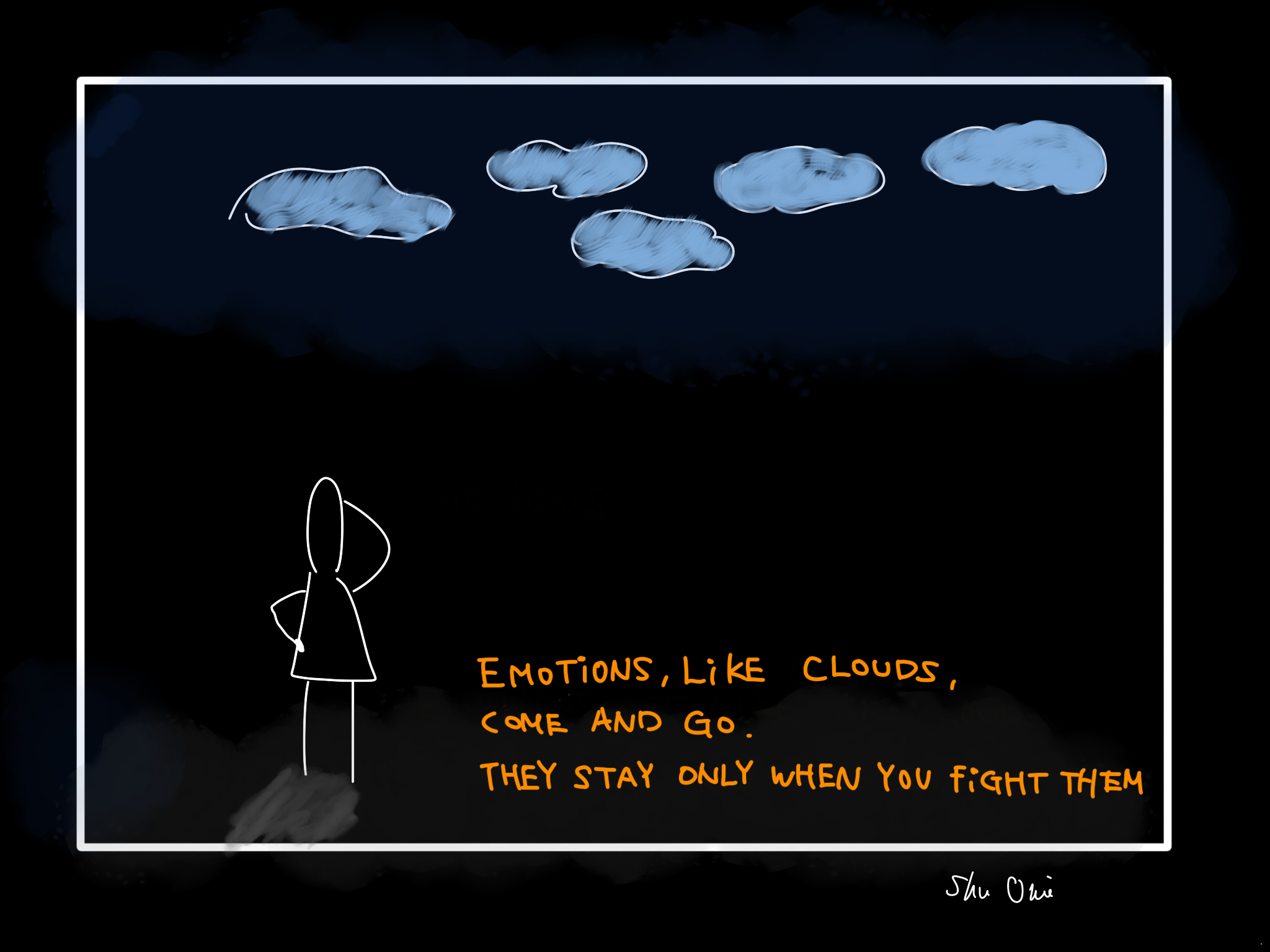 Imagine you're the sky, observing the clouds (emotions). You're a completely detached observer who doesn't interfere with the flow of the clouds. You don't have to do anything except for observing.

You don't have to try to make the clouds go away; you're willing to go on with your life while they pass by, because the more you fight them, the more power you give them.

Just let them pass. Emotions, like clouds, come and go. They stay only when you fight them.

you would be the sky, observing the clouds. You are a passive, detached observer. That’s shocking, particularly to someone in the Western culture. You’re not interfering. Don’t interfere. Don’t “fix” anything. Watch! Observe! The trouble with people is that they’re busy fixing things they don’t even understand. We’re always fixing things, aren’t we? It never strikes us that things don’t need to be fixed. They really don’t. This is a great illumination. They need to be understood. If you understood them, they’d change.

You step outside of yourself and look at that depression, and don’t identify with it. You don’t do a thing to make it go away; you are perfectly willing to go on with your life while it passes through you and disappears. If you don’t know what that means, you really have something to look forward to. And anxiety? There it comes and you’re not troubled. How strange! You’re anxious but you’re not troubled. Isn’t that a paradox? And you’re willing to let this cloud come in, because the more you fight it, the more power you give it. You’re willing to observe it as it passes by.

There’s a lovely saying of Tranxu, a great Chinese sage, that I took the trouble to learn by heart. It goes: “When the archer shoots for no particular prize, he has all his skills; when he shoots to win a brass buckle, he is already nervous; when he shoots for a gold prize, he goes blind, sees two targets, and is out of his mind. His skill has not changed, but the prize divides him. He cares! He thinks more of winning than of shooting, and the need to win drains him of power.” Isn’t that an image of what most people are?

awareness of reality around you. Awareness means to watch, to observe what is going on within you and around you. “Going on” is pretty accurate: Trees, grass, flowers, animals, rock, all of reality is moving. One observes it, one watches it. How essential it is for the human being not just to observe himself or herself, but to watch all of reality.